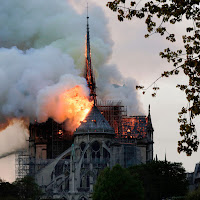 What can I say about the fire at Nôtre Dame?

It is a terrible, terrible disaster. The burning of this great and greatly beloved cathedral church is beyond the capacity of mere words, at least in the shock of tonight’s news. What moved me more even than the images of Nôtre Dame being attacked by the flames was to see French people weeping in the streets of Paris. Old, young, people of many different cultures and backgrounds, but especially Catholics for whom this is a uniquely sacred place, all were saying that this is a tragedy for France.

But the first thing to say is that thank God, no one appears to have been killed or injured thus far by this huge destructive fire. We must keep the fire fighters and others plunged into this emergency in our thoughts tonight. Trying to save a medieval building from total collapse entails great risks to many people’s safety. But there is at least a real hope that the western parts of the Cathedral with its twin towers may have escaped the worst and can be conserved. Meanwhile, our hearts go out to the people of France tonight. Like them we are stunned by this calamity that has overtaken them

I’ve visited Nôtre Dame often. I never went to Paris without venturing inside this miracle of a gothic cathedral. It was never a peaceful place - all year round crowds surged through the building,
laughing, chattering, taking selfies on their mobile phones...and yet they came in their millions,
drawn here by something many of them could not have articulated but which religious faith wants to describe in terms of the mystery of God. No English cathedral attracts visitors in such phenomenal numbers (though some might perhaps, if they did not charge for entry). It was wonderful to think that for the vast majority of tourists, coming to Paris without visiting its cathedral was unthinkable.

This isn’t the place to lament the celebrated treasures of Nôtre Dame that will have been lost, or at least severely damaged. It’s too early to tell how much of the glorious medieval glass has survived, or the sculptures or the furnishings or the organ. The fabric itself will be capable of being reconstructed much as it appeared before; after all, this was precisely what the great nineteenth century architect Viollet le Duc achieved when the French authorities realised that the Cathedral was falling down and would soon be beyond repair. The sacred space can be reimagined, but it’s the contents that are irreplaceable.

We need to understand what Nôtre Dame symbolises for the people of France. It’s similar to the emblematic significance of St Paul’s Cathedral for the English. The famous image of St Paul’s rising serenely above the fires and smoke of wartime London that did not destroy it (though the nation feared for its survival) suggest what France is feeling tonight. But I think the French feel their attachment to Nôtre Dame even more intensely. For all its laicité, France has a powerful feeling for its great Catholic shrines. Emotionally if not spiritually, for the French, Nôtre Dame is the greatest of them all.

This is because the Cathedral has stood “strong and stable” (forgive me) over so many centuries, never yielding to the often chaotic events of France’s turbulent history, surviving war, defeat, revolution, civil unrest and neglect in ways that we English haven’t experienced to quite the same extent. It’s not too much to say that Nôtre Dame symbolises the soul of France. It is its mystic heart, if you like, its collective memory reaching back into the middle ages, and even beyond to late antiquity when her first saints worshipped and evangelised on this very site in the former Roman city. This is why this catastrophe will be felt far beyond Paris, right across the country, right across Europe, right across the world not only by the French but by everyone who loves France. As President Macron said tonight, Notre Dame is part of us alL

I learned a little about what happens to a community when fire engulfs its cathedral. I’m thinking of course of Coventry Cathedral where I worked as a canon for eight years. In 1987 when it celebrated the silver jubilee of the new Cathedral, there were plenty of people who could tell stories about the night of 14 November 1940 when Luftwaffe incendiary bombs burned the medieval church of St Michael. The new building seemed a palpable symbol of resurrection, while the ruins of the old Cathedral became a symbol of forgiveness, reconciliation and hope. TO THE GLORY OF GOD THIS CATHEDRAL BURNED AND IS REBUILT says the striking inscription set in big brass letters into the nave floor of the new building. I was always deeply moved by those words.

What about Nôtre Dame? I’ve no doubt that even tonight, many people will already be thinking about what happens next. This is an especially cruel blow to have struck this great Cathedral during the holiest season of the chuch year, just when the liturgies of Holy Week had begun to be celebrated, and the days were building up to the great Paschal Triduum from Maundy Thursday to Easter.

Yes, crucifixion comes into things. But to recognise this on Holy Monday is the clue to what must follow. There will be a resurrection of Nôtre Dame, of that we can be as certain as that we shall celebrate Easter at the culmination of this Holy Week. How and when will be questions that will need to be debated for a long time. But catholic France will not lose hope as a result of this terrible fire. What feels tonight like an irrecoverable attack on a cherished holy place is, from a larger perspective another opportunity for resurrection to be experienced. When St Paul’s burned in the Great Fire of London, a new splendour rose out of the ashes. So it was at York Minster (twice). So it was at Coventry. So it will be in Paris.

These words from one of the prophets of the Hebrew Bible were important to those who oversaw the rebuilding of Coventry Cathedral after its destruction. They were spoken to the despondent exiles who returned from Babylon to Judah to find that their beloved temple was in ruins. Could it ever rise again? The prophet raises their spirits to stir them into action with a promise of hope. “The latter glory shall be greater more than it was before, says the Lord of hosts, and in this place I will give prosperity” (Haggai 2.9). As the Psalm says, “Sorrow may endure for a night, but joy comes in the morning.” Tonight must be about new life as well as death. Which is why the great word of Easter must be the last one on this evening of tears and lament: RESURGAM!

Afterthought on Tuesday morning. Thank God the fire is contained, and the core of the medieval fabric is still standing. The relics have been saved, including the Crown of Thorns, and some of the art works. The firefighters have done a magnificent job, risking their lives for a cathedral they love. Already thoughts are turning towards the rebuilding of the Cathedral and one benefactor has pledged a hundred million euros. Christians in Paris will go on observing Holy Week, but with a new intensity now, and with many tears - but, I think, with a stronger sense of resurrection hope than ever. We feel for them and pray for them today. For now, we are all Parisians.