On Books, Waves and Not Getting Angry with Rascals 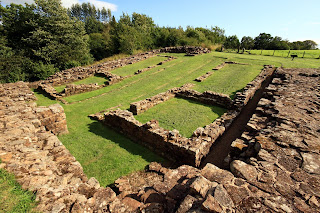 “I have taken so kindly to idleness that I can’t tear myself away from it. So either I amuse myself with books, of which I have a good stock here at Antium, or I count the waves - the weather is unsuitable for mackerel fishing... And my sole form of political activity is to hate the rascals, and even that I do without anger.”

This is Cicero in 59BCE. He had retired from his year as consul with more time to read, write and ponder. If only we had his Secret History, published posthumously because of its fierce denunciations of his enemies. This famous book is lost to us. It would have had much to say about the turbulent times he was living through as his cherished Roman Republic entered its death-throes. The waves he watched were not only those that lapped the shores of the Tyrrhenian Sea. There were political waves aplenty to watch, and despair at, and try not to get angry with the rascals who were making them.

Remind me of anyone?

Today marks the fourth anniversary of the Sunday my wife and I said goodbye to Durham Cathedral. I had been Dean there for nearly thirteen years. The historic Deanery was home to us for a lot longer than anywhere else we had lived as a couple and a family. It was a poignant day as I wrote at the time. But we soon settled into our new home in the Tyne Valley, and to the gentler rhythms of retirement in the countryside. I’ve blogged from the “front line” of retirement from time to time here, here, and recently (particularly significant for me, this one), here.

Cicero’s self-deprecating take on retirement (amid the demands of his legal practice and speech-making) rings bells for me. We have a good stock of books here at Haydon Bridge, and I’ve fulfilled a lifelong ambition to work in a bookshop (as a volunteer every Wednesday afternoon in the local Oxfam bookshop). I can’t tell you how marvellous it is to indulge a love of reading without feeling guilty.

I could write a whole blog - perhaps I shall one day - about some of the books I’ve enjoyed in the past four years - biography, railways, art, religion, poetry, politics, literature, classical history, music, the life and landscapes of North East England - and whatever else looks interesting. Retirement has demonstrated what I always thought was true of me, that I am a born dilettante. I take comfort from the Italian origin of that word, which means someone who “takes delight”, just as amateur literally means “a lover” (of activities).

“Counting the waves”: well, we don’t have many of those here in upstream Haydon Bridge, though the South Tyne creates an impressive standing wave as it sweeps over the weir below the eponymous old bridge. When the river is in spate, there are always plenty of us on the bridge contemplating this wave (and hoping that the Tyne knows its place and doesn’t invade our cellars, as Storm Desmond drove it to do just three months after we had retired here).

And contemplation comes into things in retirement. Cicero evidently enjoyed his mackerel fishing, perhaps because it made for enjoyable hours in the open air, and encouraged a reflective outlook on life, something that Izaak Walton was to write winsomely about in his classic book The Compleat Angler. For me, not an angler, there are the pleasures of walking in the Northumberland Hills, pottering round the Roman sites along Hadrian’s Wall, and other delights on offer in the beautiful environment of the Tyne Valley.

The ancient philosophers wrote about the dichotomy between the active and contemplative aspects of healthy human living. The spiritual tradition found emblems of these two sides of life in the gospel figures of Mary and Martha: Martha, busy caring for the home and managing its hospitality, frustrated at Mary whom she resented sitting and listening to Jesus when there were jobs to do. If we are lucky enough to have worked, the chances are that we have invested heavily in the active life. But retirement, with its invitation to lay activity aside at least to an extent, offers the opportunity to develop a more reflective outlook, nurture our contemplative side. I would go as far as to say that a healthy retirement requires us to do this, and learn how to quieten our spirits by being present and attentive to the moment. After all, what is contemplation but purposeful idleness? This seems to me to be the kind of spirituality we should cultivate in older age.

This is the clue to Cicero’s final point about observing politics, hating rascals but not getting angry. I hadn’t expected retirement to be so dominated by national politics and the antics of rascals. Within three months of retiring, the EU Referendum was called. I found myself writing, speaking and blogging about it, spending many waking hours reading news reports and commentary, immersing myself in it as a matter of very personal concern. (You’ll find all my blogs on this website - just trawl through the content dating from 2016 onwards.) Why was I lying awake worrying about it? Because as a child of Anglo-German parentage, Europeanism was instilled in me at a very early age. I could not bear the thought that the UK might leave the European Union, this project inaugurated by people of vision who wanted to secure peace in our continent for the sake of future generations. I still can’t.

I confess that all my life, I’ve never felt so angry about British politics as I have done in these years of retirement. “Rascals” is a benign word to describe the kind of deceit and chicanery we’ve witnessed from hard Brexiters since the campaign was launched. And yes, a propensity for hatred comes into things if you are a man or woman who believes in something passionately and wants to safeguard it against those who would wilfully dismantle it. I’m not defending myself by pointing to those Psalms where the author puts into words his visceral hatred towards those whom he talks about as his, and God’s, enemies. Yes, it can soon collapse into an ugly self-righteousness. I can be prone to that. But I simply want to notice that anger and hatred are present in the experience of the people of God. It’s not edited out of their prayer.

Dealing with anger is a spiritual issue. I really do not want to be angry in my spirit as I grow old. In Psalm 37, the Psalmist advises: “fret not thyself because of the ungodly”. The secret is, I think, the contemplative spirit Cicero exhibits. Stoic teaching (which he admired) and the wisdom literature of the Hebrew Bible are at one here. A quiet eye inculcates a quiet spirit - not without feelings and passions, but not ruled by them, especially the negative ones. “They who are run away with by their lust or anger have quoted the command over themselves” writes Cicero in a piece called “On Grief of Mind”. A contemplative take on politics, even the politics of madness - this is what I’m trying to cultivate. This means channelling anger towards rascals into positive action, discovering how hatred can be transcended, if not by love, then at least by what R. S. Thomas called in one of his poems, “willed gentleness”. And try to respect and to disagree well, even when we differ so profoundly.

How am I getting on? Fitfully, I think. Brexit is a big test of my Christianity. But wisdom, with its insights into who and what I am, and why human behaviour (including mine) is so wayward and liable to corruption, comes to the rescue. Contemplation brings a larger perspective. And this bigger picture is an essential spiritual aspect of ageing if our lives are not to be narrowed as we face our mortality. Today’s anniversary is an opportunity to pause and take stock.

So books, waves and not getting angry are all part of the same picture. Perhaps it’s time I took up fishing?
Posted by Aquilonius at 20:40